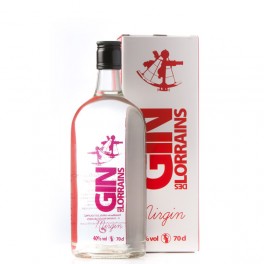 The Lorraine MIRGIN Gin is a spirit made from juniper berries. It was fully formulated at Maison de la Mirabelle in Rozelieures ('54) by the Dupic Grallet distillery. MIRGIN gets its roundness and warmth from the Mirabelle de Lorraine. A touch of coriander makes the whole perfect. Bottle 70 cl 40% vol

An invitation to travel to the Maison de la Mirabelle:

The GRALLET DUPIC distillery decided to visit all great spirits of the world around Mirabelle (Gin, Vodka, bitters,...). It is therefore a sensory journey that awaits you. Let us surprise you!

The Maison de la Mirabelle gin "MIRGIN" is based on the traditional formula, to which we have chosen to add cilantro and mirabelle plum to give a very round and warm aspect. MIRGIN can be consumed alone with icecubes or cocktail with the nectar of mirabelle or simply in GIN and TONIC.

Gin is an eau de vie obtained by flavouring alcohol of agricultural origin with juniper berries that give it its particular aroma.

The history of GIN:

Appeared in the Netherlands in the 14th century, historians consider the Gin as the father of spirits in Europe. Gin is close to his ancestor Juniper. The Dutch sold Gin to the English until the latter monopolized the manufacture of Gin. In the 19th and 20th century, Gin was the drink of the English aristocracy and jet set while the uneducated populations in the North of the Kingdom (Scotland) consumed whisky. Things have quite evolved since...