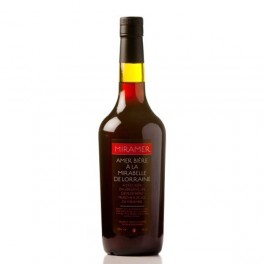 This bitter beer was made from mirabelle plum eau de vie from Lorraine, gentian eau de vie from Haut-Doubs and from bitter orange extract. MIRAMER brings the warmth of the Mirabelle Plum in a good beer. MIRAMER is to be enjoyed by pouring one half of fresh beer on 3cl of Miramer.

An invitation to travel by the Maison de la Mirabelle:

The GRALLET DUPIC distillery decided to visit all great spirits of the world around Mirabelle (Gin, Vodka, bitters,...). It is therefore sensory journey that awaits you. Let us surprise you!

Bitters are a liqueur composed around the bitter orange, gentian and Cinchona.
The bitterness goes well with the finesse of the mirabelle plum which we wanted very present in MIRAMER. A detonating association for all beer lovers.

The history of bitters:

Bitters are a stimulant liqueur that has origins in the 18th century. It contains quinine (Cinchona), and has medicinal properties against Naseem. For this reason, this drink found a true boom in North Africa where the inhabitants were struggling then with many mosquitoes attacks (19th and 20th centuries). Gaëtan PICON was the developer of this drink in North Africa as well as in Europe. Bitters are often consumed with beer in Belgium, as well as in the North and East of France.